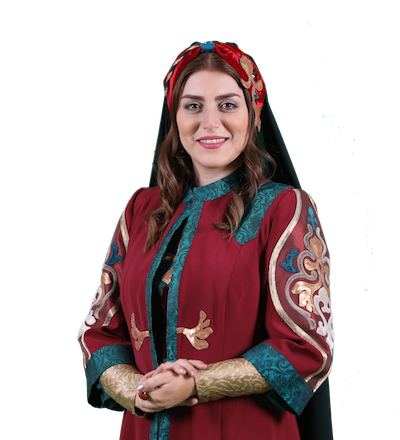 Mahdieh Mohammadkhani the CEO and Founder of Shahnava

Mahdieh Mohammadkhani is a young yet well known female vocalist that has made quite a buzz since her rise to fame in 2012. Her exquisite voice combined with her technique and remarkable stage presence has made her a true star. Her tonal range and ability to sing with her powerful yet velvety voice has made her the all round vocalist for famed composers.

Born in 1986, Tehran, Iran, she began learning music at early ages, by playing the Piano. She began her career as a professional architect, but her love and passion for Iranian music inspired her to  learn the art of Iranian Vocals & Radif (Style of Taherzadeh) in 2009 under the guidance of Mr. Gholamreza Rezaie, a distinguished student of Maestro Mohammadreza Shajarian and in 2012, her perseverance enabled her to get accepted into Maestro Shajarian’s masterclasses and allowed her to learn the teachings of the maestro in person.

Over the years she has had the opportunity to work with some of the most proficient and well known Iranian musicians, such as Hamid Motebassem, Hossein Behroozinia, Saeed Farajpouri, Pejman Haddadi, Behnam Samani, Mazda Ansari, Behzad Abdi and Majid Derakhshani, to name a few. Mahdieh has performed as a solo vocalist in numerous European countries, as well as United States, Canada and Australia with various ensembles such as “Mâh”, “Dastân” and “Tar-o-Pood”.

Mahdieh has been teaching Iranian Vocal Techniques over the past two years to many interested women in person and online.